Home /  The Plus /  Welcoming Foxconn to Wisconsin
Industry News 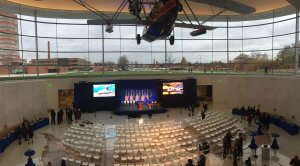 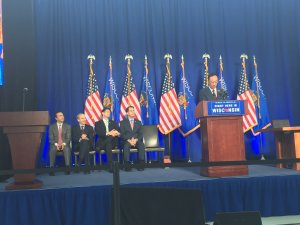 Johnson opened the event held in Fortaleza Hall of their Racine headquarters. It is an inspiring venue, paying tribute to Sam Johnson’s pioneering spirit and the Sikorsky S-38 amphibious plane he flew in the 1930s to South America in search of waxes that helped to build the company into the cleaning products giant it is today. It was here, in the halls of a 131-year old, family run business, that the contract was signed by Governor Scott Walker and Foxconn Chairman Terry Gou.

The juxtaposition of these two companies – one a historic family business and longtime pillar of the community, the other a high-tech Taiwanese company – was amazing. Although they may seem very different, they are equal in their spirit of entrepreneurship and innovation. What a fitting location to welcome our new neighbor. 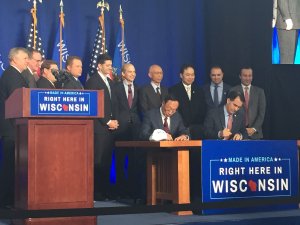 House Speaker Paul Ryan and others were also on hand for a round of speeches. The panel was enthusiastic about the jobs this project will bring to the area, and many comments were made to describe the size of the plant, which will be, roughly, “the size of 15 Lambeau Fields.” Gou also previewed some of the technology that will be manufactured at the plant, centered around 8k resolution and 5g network technology. Applications for this type of technology will be found in televisions and endoscopic healthcare equipment, as well as high level facial recognition for surveillance systems. 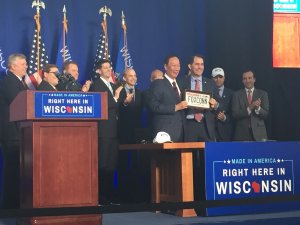 The Foxconn deal is the biggest development deal in our state’s history. It’s exciting to think about what this could mean for southeastern Wisconsin.