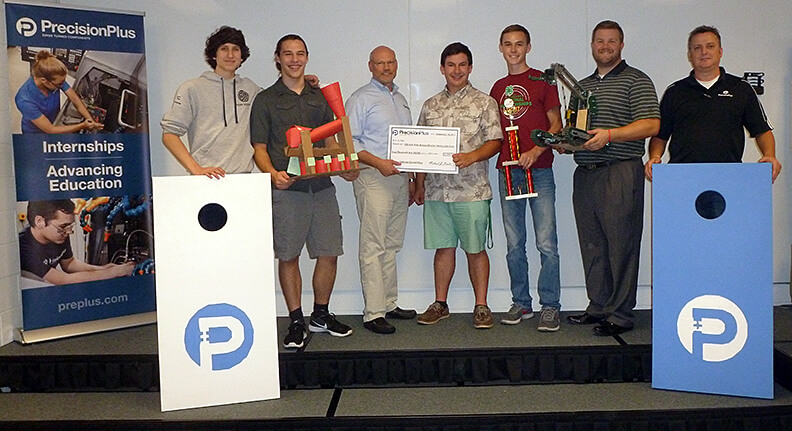 This past spring, Mr. Fred Ganter of Elkhorn Area High School (EAHS), along with some of his SkillsUSA team members, made a presentation to Precision Plus requesting support to help them attend and compete at the National SkillsUSA competition June 19-23, in Louisville, Kentucky. Mike Reader committed to helping the team, and this week the group of high school seniors returned to accept the check, report back on the competition, and discuss their post-graduation goals. Also, to show their gratitude, the students presented Precision Plus with a branded cornhole game set they made in the recently upgraded EAHS Technical Education Department.

After graduation, Cade hopes to attend Cornell University in Ithaca, New York, and earn a degree in automotive engineering. His favorite class has been EAHS CO-OP for Autos III where he has the opportunity to work on cars, like doing oil changes, fixing brakes, and replacing transmissions. He says the biggest influences on his life have been both his Grandpa Dave, who shares his love of aviation, and his Grandpa Wally who helped Cade start a trap shooting team at EAHS.

Jack has enjoyed his physics and engineering classes at EAHS, and when he graduates, he would like to pursue a degree in mechanical engineering or robotics engineering. He names his brother Jake, who holds a degree in chemical engineering, as his greatest influence, saying he admires his intelligence and work ethic.

Anthony Alagna competed at the state level this past April in the IT Competition. He was tested on general IT knowledge and assigned to an online lab to complete at home. Anthony placed 2nd out of 10 competitors at the state level, and this season, he plans on first winning state and then winning nationals!

Anthony has always loved science and computers, so after graduation, he’ll likely pursue a degree in either aerospace engineering, computer IT work, or physics. His favorite class, so far, has been AP physics because he enjoys the material and the way it makes him think in a “completely new way.” The biggest influence on his life has been his mother.

Nick Flock competed in the team problem-solving event and was given the task to design, build, and sell a marble sorter. In addition to designing and building the project, he had to stay within a budget while purchasing components from the “store” with the “funds” he was given. He enjoyed having to work on a real-world situation, which even included developing the advertising needed to promote his product.

Nick isn’t sure where he is attending college yet, but he knows he’d like to pursue physics. He has always enjoyed math and science, and he loves the way engineering is the applied version of both. He also enjoys building computers for himself and his friends.

Mr. Ganter says the current SkillsUSA club at EAHS has 20 members, but they continue to recruit more students throughout the school year. The SkillsUSA state competition takes place April 2018 at the Alliant Energy Center in Madison. Precision Plus is proud to support the EAHS students as they pursue their next goals. They continue to impress us with their hard work and passion, and they are shining examples of America’s future workforce.