Movement as an art form 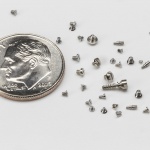 Quiz: Who is the only watch manufacturer in the world to put product on the moon?

Answer: Omega SA. They were selected after a series of rigorous tests concluded that they produced the most accurate and robust movements in the world at that time.

The Swiss type screw machine was invented in Moutier, Switzerland around 1870.  Several lay claim as the first, but the impact on the machining world has been profound. What started as the only solution for large scale production of these tiny, yet very precise watch screws, shafts and worm gears, has expanded across nearly every industry in need of close tolerance machined solutions. Having toured Omega headquarters and several tier one suppliers within Switzerland, we are pleased to say most all of these intricate watch parts are still produced on the Tornos, Swiss screw machines to this day.

Precision Plus understands what good customer service is. We feel like our business is highly valued. Precision Plus does not over-promote themselves, they deliver.